German tabloid Bild has published a report claiming that two of Arsenal’s summer target, Matthias Ginter and Josip Drmic are set to join Borussia Dortmund instead of the Gunners.

Arsenal, who have been on the trail of highly rated Ginter for a while now need to move as fast as they could if they hope to sign one of the most exciting young defenders in the Bundesliga.

Few months back the Sun Newspaper actually reported that the Gunners had sealed the signature of the German defender who plays for Freiburg in the Bundesliga. The deal was said to been sealed after a fee of £6.1 Million was said to have been agreed by both clubs. The German tabloid (Bild) appears to have rubbished the report on the Sun Newspaper by claiming that the player instead will be moving to Borussia Dortmund for a reported fee of €8 Million.

Bild didn’t end it there, as they also report that Arsenal striker target, Josip Drmic is also a big target for Dortmund as Jurgen Klopp hopes to replace the departing Robert Lewandowski who is set to join Bayern in the summer.

Just this week, former German international, Lothar Matthaeus claimed the 21 year old Swiss striker was actually on his way to London to sign for the Gunners for €8 Million.

“You will see Drmic will go to Arsenal for 8 million – I was right before and I’ll be right again,” Matthaeus was reported to have said.

It is difficult at this stage to know what to believe, but Bild does have a reputation when it comes to calling transfer correctly. However, the way Matthaeus has been going about the Drmic story; one cannot but be tempted to accept his version as he was able to call the Lewandowski to Bayern story correctly.

One can only hope that both stories as reported in today’s publication of the German tabloid Bild are not true as it would be a double transfer blow for the Gunners.

Arsenal certainly need the likes of Josip Drmic and Mathias Ginter as plans for the summer transfer window hots up.

The image of the bild paper report is below : 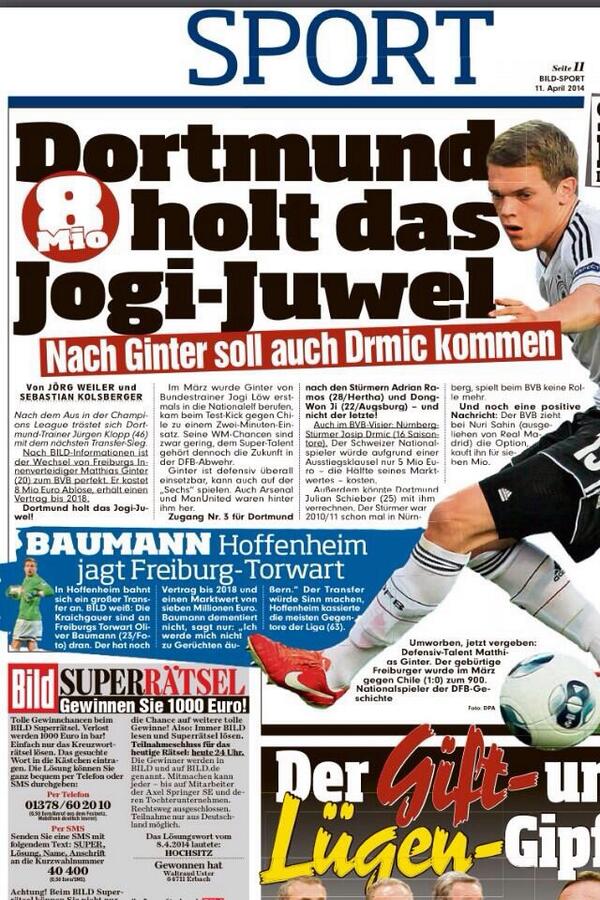 View all posts by Harry →